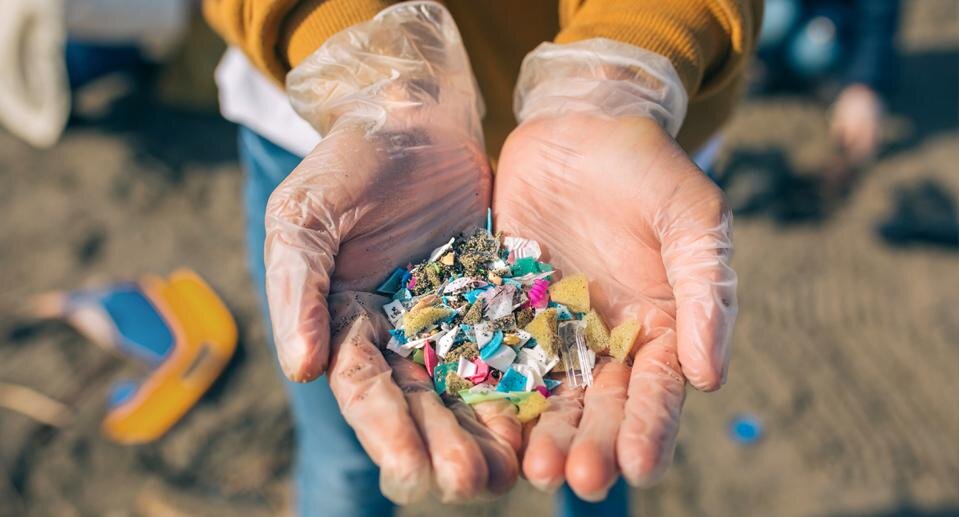 Microplastics come from a variety of sources, such as plastic fibers from synthetic textiles-AdobeStock

The Atlantic Ocean contains between 12–21 million tonnes of microplastic waste, much higher than previously determined, reports a new study published in Nature Communications.

Scientists assessed the abundance of polyethylene, polypropylene and polystyrene, the three most common commodity plastics that together make up over half of global plastic waste down to a depth of 200 meters. They quantified the contamination in samples collected at 12 locations along a 10,000 km north-south transect of the Atlantic Ocean, stretching from Southampton to the Falkland Islands.

Assessment of the ecological and environmental damages caused by accumulating microplastics are hampered by the lack of robust quantifications from the systems in which they accumulate, especially in remote locations like the oceans.

The term microplastics is used to describe small plastic pieces typically less than five millimeters in length, which can be extremely harmful to ocean and aquatic life. They come from a variety of sources, including the degradation of larger pieces of plastic, microbeads found in personal care products, plastic pellets (or nurdles) used in industrial manufacturing and plastic fibers used in synthetic textiles, like nylon.

“We had this fantastic opportunity to join the annual Atlantic Meridional Transect expedition to the South Atlantic,” Dr Katsiaryna Pabortsava, from the National Oceanography Centre in Southampton and co-author of the paper told Forbes. “The whole point of the expedition is to collect biogeochemical data about how the oceans works, changing carbon dioxide levels and so on.”

At each of the locations, samples were collected from three depths below the ocean surface: 10 meters, 10–30 meters below the mixed layer of the ocean, and 100 meters below the intermediate sample (a total depth of 200 meters). Plastics were analyzed down to a resolution of 25 micrometres (one thousandth of a millimeter). In the near surface ocean, they detected up to 7,000 microplastic particles of these three polymer types (32–651 micrometres in size) per cubic meter of seawater.

Based on plastic waste generation trends from 1950–2015 (such as the research of Roland Geyer and Jenna Jambeck) and assuming that the Atlantic Ocean was consistently receiving a fraction of global plastic waste for 65 years, researchers estimated that the input of plastic to the Atlantic waters and sediments was 17–47 million tonnes. When the microplastic mass of just the three polymers sampled was combined with previously calculated marine plastic stocks, they found that the total mass of material currently present balances – or may even exceed – the estimated plastic input into the Atlantic since 1950.

“Previous papers have looked at coastal areas about 40 kilometers from shore and largely at municipal waste. But if you think about sources of plastic, there’s so much more than just municipal waste. So anything that is dumped at sea for example is not generally considered, anything that is brought by winds into the ocean hasn’t been considered as well,” Pabortsava said.

This isn’t the first time scientists have theorized that the problem is much worse than than previously thought. A short while ago, scientists trawled waters off the coasts of the UK and US using nets with a smaller mesh size than those generally used to filter microplastics and found the amount of particles much higher than expected. Concentrations could exceed 3,700 particles per cubic meter, that’s more than the number of zooplankton you would find.

Microplastic pollution has affected the whole planet, it has been found in Arctic snow to deep in the oceans. The particles can harbor toxic chemicals and harmful microbes and are known to harm some marine creatures. It is also known now that humans consume them via food and water and even inhalation.

A new study of five different kinds of seafood revealed traces of plastic in every sample tested. Researchers from the University of Queensland purchased raw samples of popular seafood from a local Brisbane market, including 10 oysters, 10 farmed tiger prawns, 10 wild squid, five wild blue crab and 10 wild sardines. At least trace levels of plastic contamination were found in each, with the highest content found in sardines, according to the research.

Moreover, microplastic and nanoplastic particles can now be detected in human organs for the first time as a result of a pioneering new technique. However, it’s unclear whether they actually are and the potential impact on human health is not yet fully understood.