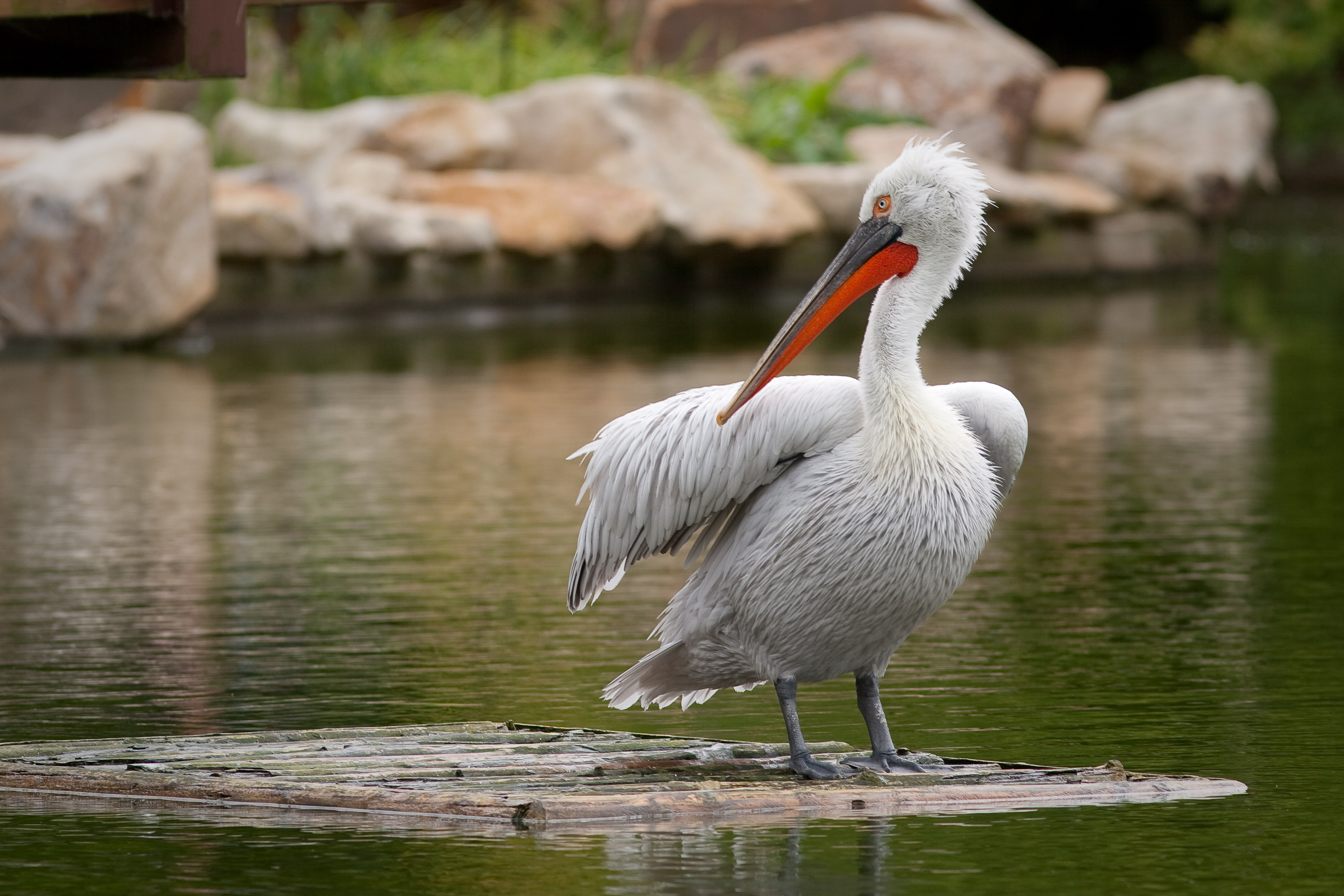 The Dalmatian Pelican is by a slight margin the largest of the pelican species and one of the largest living bird species. It measures 160 to 183 cm in length, 7.25 – 15.0 kg in weight and 290 – 345 cm in wingspan. The Dalmatian Pelican differs from its sibling – the Pink Pelican, in that it has curly nape feathers grey legs and silvery-white (rather than pure white) plumage. In winter the adults go from silvery-grey to a dingier brownish-grey cream color. Immature birds are grey and lack the pink facial patch of mature pelicans. The male is the same color as the female. The bones of the huge beak and the whole skeleton have a plurality of cavities filled with air.

Below the lower jaw pelicans have a skin pouch which contains the caught fish. During the mating season the bird has an orange-red lower mandible and pouch against a yellow upper mandible that makes it more beautiful and attractive. In winter the whole bill is a somewhat dull yellow. The bill, at 36 to 45 cm (14 to 18 in) long, is the second largest of any bird, after the Australian pelican (Pelecanus conspicillatus).

The Dalmatian Pelican is often silent, as most pelicans tend to be, although it can be fairly vocal during the mating season when it may engage in a wide range of guttural, deep vocalizations, including barks, hisses and grunts.

Dalmatian pelicans inhabit the coasts of large ponds rich in fish, and rivers and lakes from Southeastern Europe to India and China. They breed on the Balkan Peninsula, on the east coast of the Black Sea, the coasts of the Azov, Caspian and Aral seas, the Balhash Lake, in Kazakhstan, Mongolia, North China. They are also distributed in Bulgaria – in the biosphere reserve of Srebarna, but the Burgas Lakes are among the most important for these species during wintering and migration. Then they can be observed there in clusters from several hundred to over a thousand individuals. Nesting, migratory and partly wintering species in Bulgaria, Dalmatian pelicans travel for short distances. In winter they fly to the river Nile. The Dalmatian Pelican leaves its nesting area in late August and returns in March.

The Dalmatian pelican feeds exclusively on fish. It requires around 1,200 g fish per day. Social, it has a very strong herd instinct. It uses a collective fishing technique: а group of birds chases the fish to the shore where it is caught more easily in the shallow waters. Occasionally, it may not eat the fish contained in its gular pouch right away and can save the prey for later consumption.

The Dalmatian Pelican nests in lakes and marshes with vast and inaccessible reed beds usually from the beginning of February. When searching for food the adult birds can fly up to 20-30 km away from their nesting colonies. The nest is a pile of grass, reeds, sticks and feathers, usually about a meter deep and 63 cm in diameter. Most often from late March to early May the female lays two eggs that both partners incubate 30 to 34 days by replacing each other. The chicks are born naked but soon they sprout white feathers underneath. They start flying in July – August after about 85 days and become independent from the 100th up to the 105th day.

In Bulgaria the Dalmatian Pelican is protected since 1962 and is included in the Red Book since 1985. It is one of the species to which the Agreement on the Conservation of African-Eurasian Migratory Waterbirds (AEWA) applies. Efforts for the conservation of the birds especially in Europe have been undertaken. Although they normally nest on the ground, Dalmatian pelicans nest also on the platforms put out to encourage their breeding in Turkey, Greece, Bulgaria and Romania. Rafts over water have also been set up for the species to use in Greece and Bulgaria, and power-lines have been marked or dismantled in areas adjacent to their colonies. Efforts for their conservation have been undertaken in Asia too but the rate of poaching, shooting and habitat destruction there is much higher which makes the efforts much more difficult.