One million out of eight million species globally are threatened with extinction. Find out which and how many species in Europe are endangered or extinct.

Endangered species are plants and animals that are threatened with extinction. This is mainly caused by the loss and degradation of habitat, but also by among others pollution, climate change and invasive alien species. However, biodiversity is key for healthy ecosystems and human life.

In order to preserve endangered species, the EU wants to improve and preserve biodiversity. In a resolution adopted in January, Parliament called for an ambitious EU 2030 Biodiversity Strategy to address the main drivers of biodiversity loss, and set legally binding targets for the EU and its member states.

As the European Commission unveils its new 2030 strategy, learn more about endangered species and biodiversity loss in Europe.

The International Union for Conservation of Nature (IUCN) has created a European Red list of endangered species so that action can be taken to try and save them.

1,677 species  ; At least 1,677 species out of 15,060 assessed European species are threatened with extinction, according to IUCN

Of the 1,677 European species threatened with extinction, the most endangered are snails, clams and fish.

Over half of Europe’s endemic trees, including the horse-chestnut, Heberdenia excelsa and the sorbus are at risk and about one fifth of amphibians and reptiles are endangered.

The arctic fox, the European mink, Mediterranean monk seal, the North Atlantic right whale and the polar bear are currently among the most endangered mammals in Europe.

Pollinators are also declining. One out of 10 European bee and butterfly species is threatened with extinction. 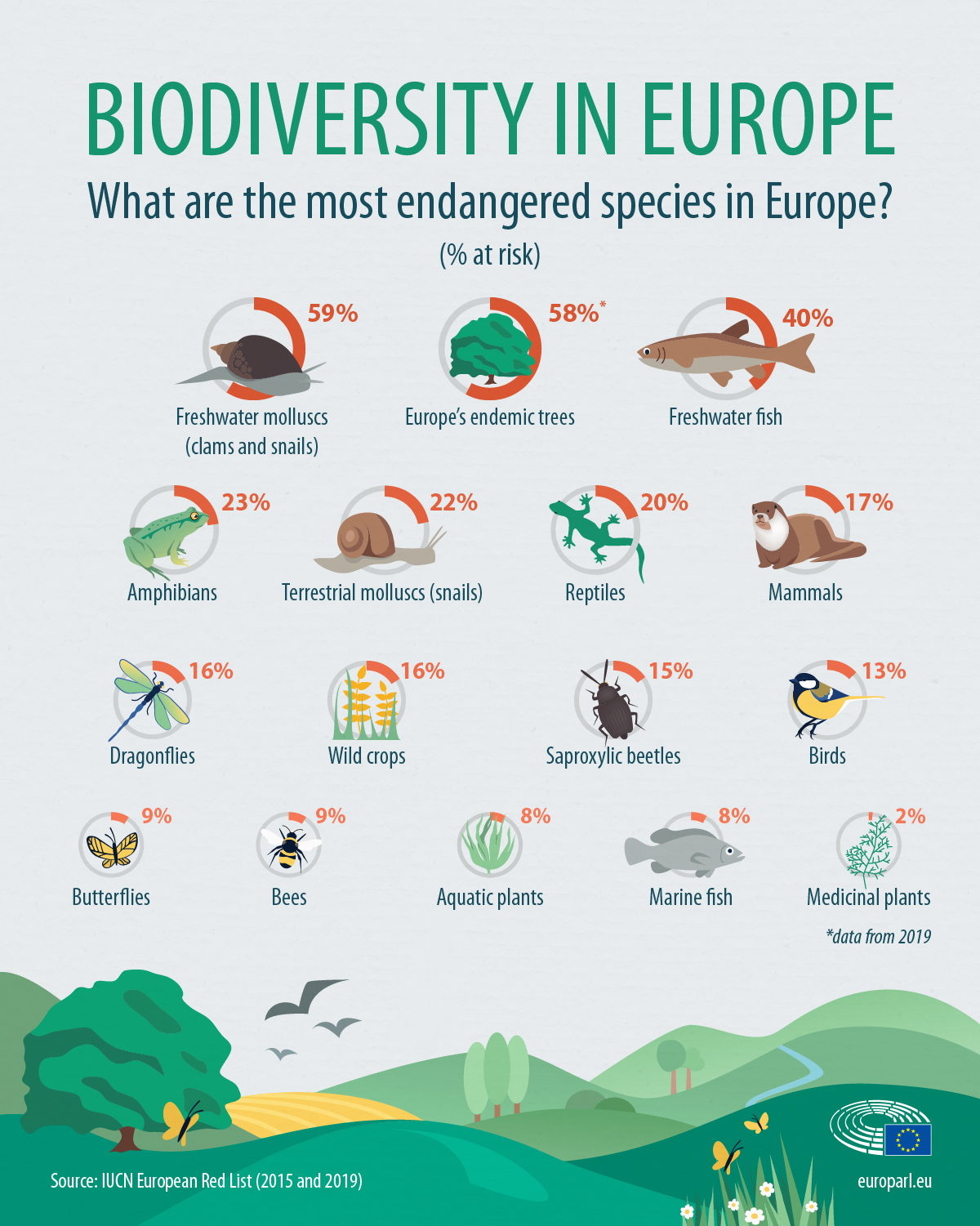 Infographic on the most endangered species in Europe

According to IUCN, 36 species have become extinct in Europe as of 2015, including many freshwater fish, several other Coregonus species (a type of salmon), the freshwater mollusc Graecoanatolica macedonica (a small freshwater snail unique to Lake Dojran in Greece and North Macedonia), and Pensée de Cry, a purple flower.

From the mammals, Aurochs (a type of large wild cattle) and the Sardinian Pika (a cousin of the rabbit) went extinct in the 17th and 18th century respectively.

Further research is needed to assess the situation, in particular of bees, marine mammals and fish.