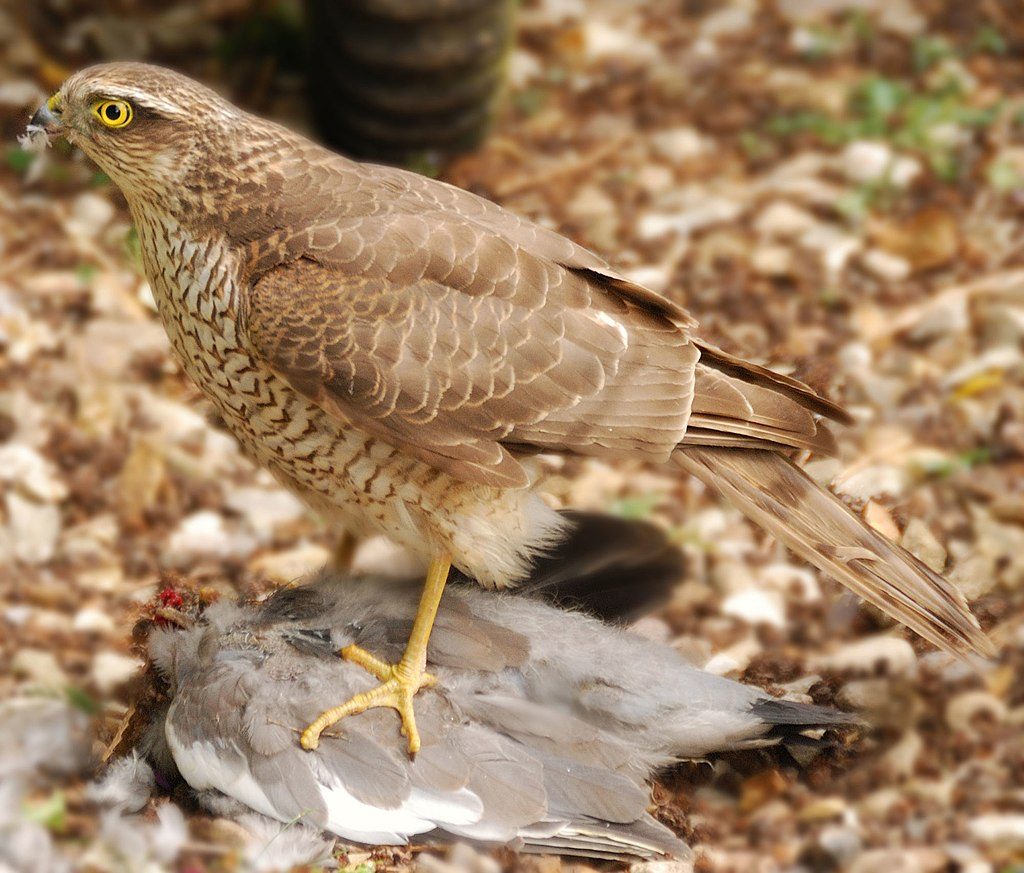 The Eurasian sparrowhawk is a small bird of prey with short, broad wings and a long tail, both adaptations to manoeuvring through trees. Females can be up to 25% larger than males and weigh up to twice as much. Marked size difference in this direction is unusual in higher vertebrates but typical in birds of prey, and most marked in birds of prey which hunt birds.

The adult male is 29–34 cm long, with a wingspan of 59–64 cm and a mass of 110–196 g. He has slate-grey upperparts (sometimes tending to bluish), with finely red-barred underparts, which can look plain orange from a distance; his irides are orange-yellow or orange-red.

The female is much larger at 35–41 cm long, with a wingspan of 67–80 cm, and a mass of 185–342 g. She has dark brown or greyish-brown upperparts, and brown-barred underparts, and bright yellow to orange irides.

The juvenile is warm brown above, with rusty fringes to the upperparts; and coarsely barred or spotted brown below, with pale yellow eyes; its throat has dark streaks and lacks a mesial (midline) stripe.

The Eurasian sparrowhawk’s small bill is used for plucking feathers and pulling prey apart, rather than killing or cutting. Its long legs and toes are an adaptation for catching and eating birds. The outer toe is “fairly long and slender”; the inner toe and back toe are relatively short and thick. The middle toe is very long and can be used to grasp objects, while a protuberance on the underside of the toe means that the digit can be closed without leaving a gap, which helps with gripping.

The Eurasian sparrowhawk is found throughout the temperate and subtropical parts of the Old World; while birds from the northern parts of the range migrate south for winter, their southern counterparts remain resident or make dispersive movements. It is one of the most common birds of prey in Europe, along with the common kestrel and common buzzard.

This species is prevalent in most woodland types in its range, and also in more open country with scattered trees. Eurasian sparrowhawks prefer to hunt the edges of wooded areas, but migrant birds can be seen in any habitat.Unlike its larger relative the northern goshawk, it can be seen in gardens and in urban areas and will even breed in city parks if they have a certain density of tall trees.

Eurasian sparrowhawks from colder regions of northern Europe and Asia migrate south for the winter, some to north Africa (some as far as equatorial east Africa) and India; members of the southern populations are resident or disperse. Juveniles begin their migration earlier than adults and juvenile females move before juvenile males.

Though it is a predator which specialises in catching woodland birds, the Eurasian sparrowhawk can be found in any habitat and often hunts garden birds in towns and cities. Males tend to take smaller birds, including tits, finches, and sparrows; females catch primarily thrushes and starlings, but are capable of killing birds weighing 500 g or more.

The Eurasian sparrowhawk is a major predator of smaller woodland birds, though only 10% of its hunting attacks are successful. It hunts by surprise attack, using hedges, tree-belts, copses, orchards and other cover near woodland areas; its choice of habitat is dictated by these requirements. It also makes use of gardens in built-up areas, taking advantage of the prey found there.

It waits, hidden, for birds to come near, then breaks cover and flies out fast and low. A chase may follow, with the hawk even flipping upside-down to grab the victim from below or following it on foot through vegetation. It can “stoop” onto prey from a great height.

More than 120 bird species have been recorded as prey and individual Eurasian sparrowhawks may specialise in certain prey. The birds taken are usually adults or fledglings, though chicks in the nest and carrion are sometimes eaten. Small mammals, including bats and mice, are sometimes caught but insects are eaten only very rarely.

Eurasian sparrowhawks breed in suitable woodland of any type, with the nest, measuring up to 60 cm (2.0 ft) across, built using twigs in a tree. Four or five pale blue, brown-spotted eggs are laid; the success of the breeding attempt is dependent on the female maintaining a high weight while the male brings her food. The chicks hatch after 33 days and fledge after 24 to 28 days.

The probability of a juvenile surviving its first year is 34%, with 69% of adults surviving from one year to the next. Mortality in young males is greater than that of young females and the typical lifespan is four years.

Sexual maturity is reached at between 1–3 years.

This species is now one of the most common birds of prey in Europe, although the population crashed after the Second World War. Organochlorine insecticides used to treat seeds before sowing built up in the bird population, and the concentrations in Eurasian sparrowhawks were enough to kill some outright and incapacitate others; affected birds laid eggs with fragile shells which broke during incubation. However, its population recovered after the chemicals were banned, and it is now relatively common, classified as being of least concern by BirdLife International. 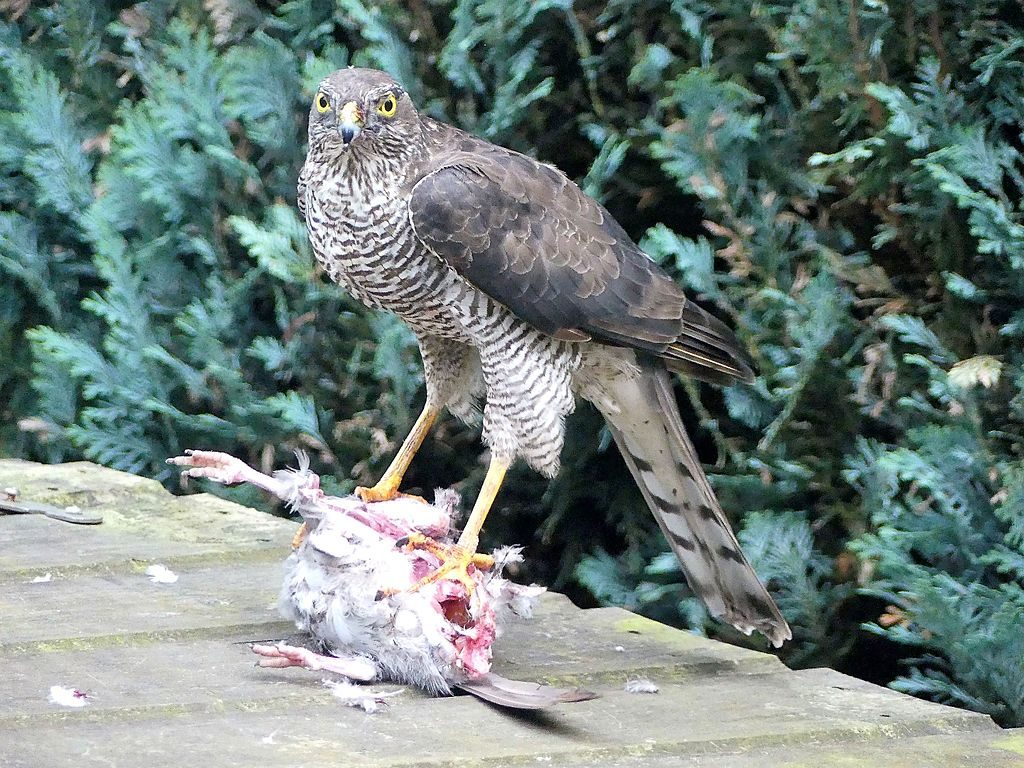 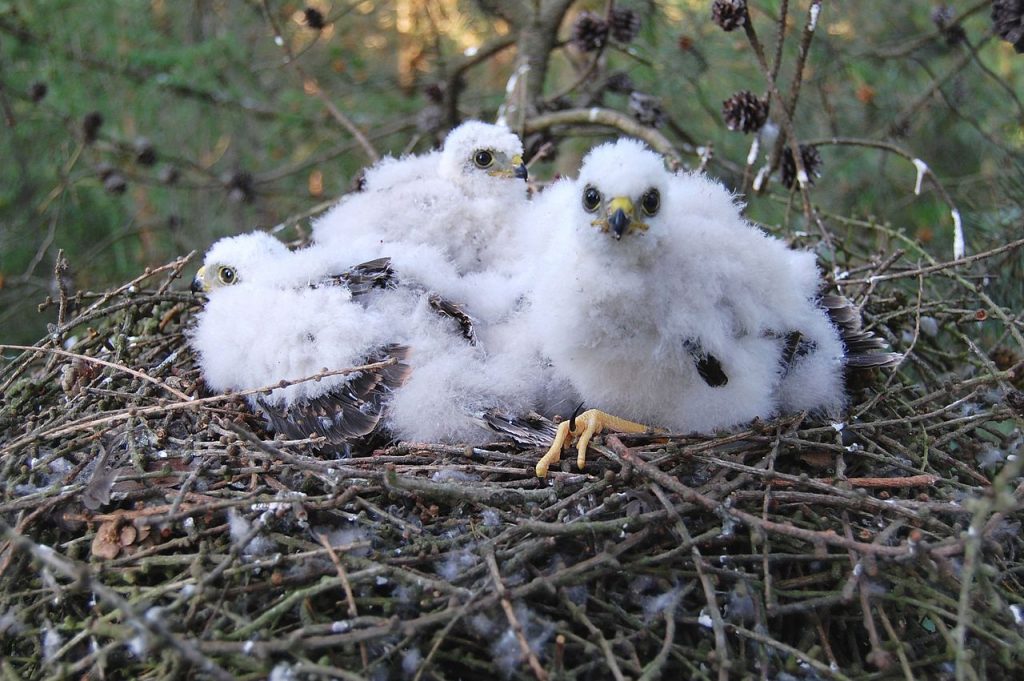 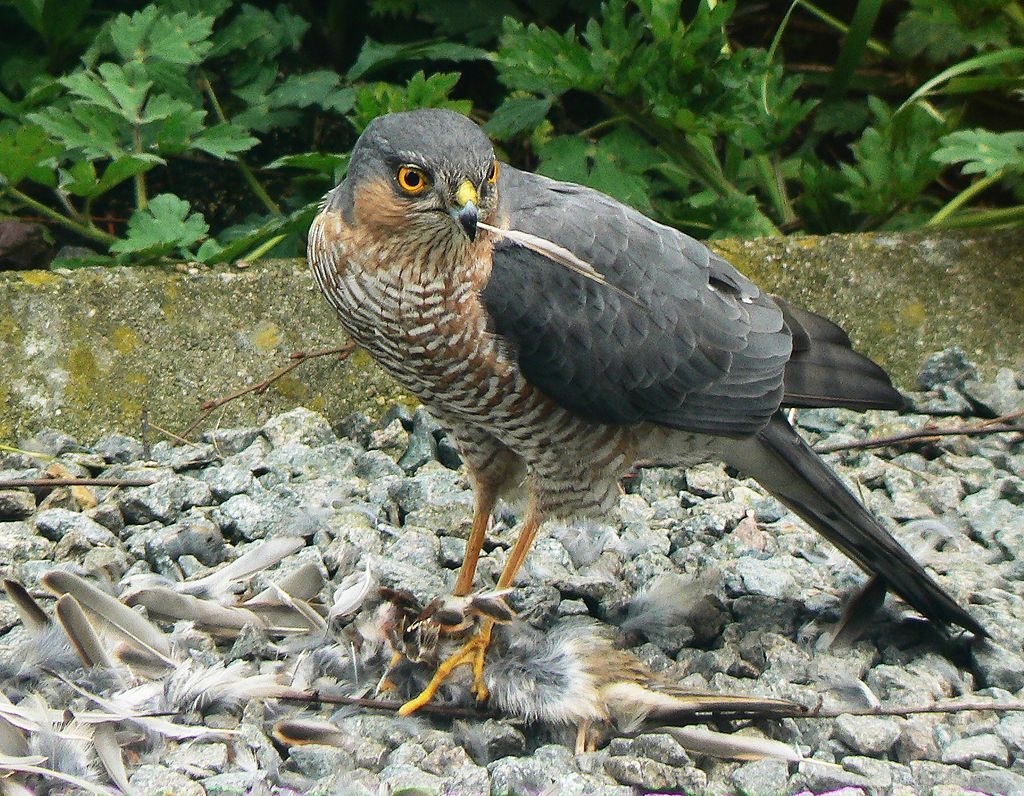