Video made by avibirds team

The Great White Pelican is a huge bird, with only the Dalmatian pelican averaging larger amongst the pelicans. The wingspan can range from 226 to 360 cm, with the latter measurement the largest recorded among extant flying animals outside of the great albatrosses. The total length of the great white pelican can range from 140 to 180 cm with the enormous bill comprising 28.9 to 47.1 cm of that length. Adult males weigh from 9 to 15 kg. Females are considerably less bulky and heavy, weighing from 5.4 to 9 kg. The standard measurements from differing areas indicate that pelicans of the Western Palaearctic species are somewhat larger in size than the ones that reside in Asia and Africa.

Immature great white pelicans are grey and have dark flight feathers. In flight it is an elegant soaring bird, with the head held close to and aligned with the body by a downward bend in the neck. When breeding the male has pinkish skin on its face and the female has orange skin. It differs from the Dalmatian Pelican by its pure white rather than greyish-white plumage, a bare pink facial patch around the eye and pinkish legs. Males are larger than females and have a long beak that grows in a downward arc, as opposed to the shorter, straighter beak of the female. The Spot-billed Pelican of Asia is slightly smaller than the Great White, with clear brownish-grey plumage and a paler, duller-colored bill. Similarly, the Pink-backed Pelican is smaller with brownish-grey plumage, with a light pink to off-grey bill and a pinkish wash to the back.
The Great White Pelican is well adapted for aquatic life. The short strong legs and webbed feet propel it in water and aid the rather awkward takeoff from the water surface. Once aloft, the long-winged pelicans are powerful fliers and often travel in spectacular V-formation groups.

Great White pelicans are usually found in and around shallow, (seasonally or tropical) warm fresh waters. Well scattered groups of breeding pelicans are found through Eurasia from the eastern Mediterranean to Vietnam. In Eurasia they inhabit fresh or brackish waters and can be found in lakes, deltas, lagoons and marshes, usually with dense reed beds nearby for nesting purposes. Migratory populations are found from Eastern Europe to Kazakhstan during the breeding season. More than 50% of the Eurasian great white pelicans breed in the Danube Delta on the Bulgaria-Romania border. They also like staying in the lakes near Burgas and in the Srebarna Lake. They arrive at the Danube in late March or early April and depart after breeding, from September to late November. Sedentary populations are found year-round in Africa, south of the Sahara Desert although these are patchy. In Africa great white pelicans are found mainly around freshwater and alkaline lakes and in coastal, estuarine areas. Beyond reed beds African pelicans have nested on inselbergs and flat inshore islands off of Banc d’Arguin National Park. The wintering locations for European pelicans are not exactly known but wintering birds can be found in northeastern Africa through Iraq to north India, with a particularly large number of breeders from Asia wintering around Pakistan and Sri Lanka. These are birds that are found mostly in lowlands, although in East Africa and Nepal some live at up to 1,372 m height. 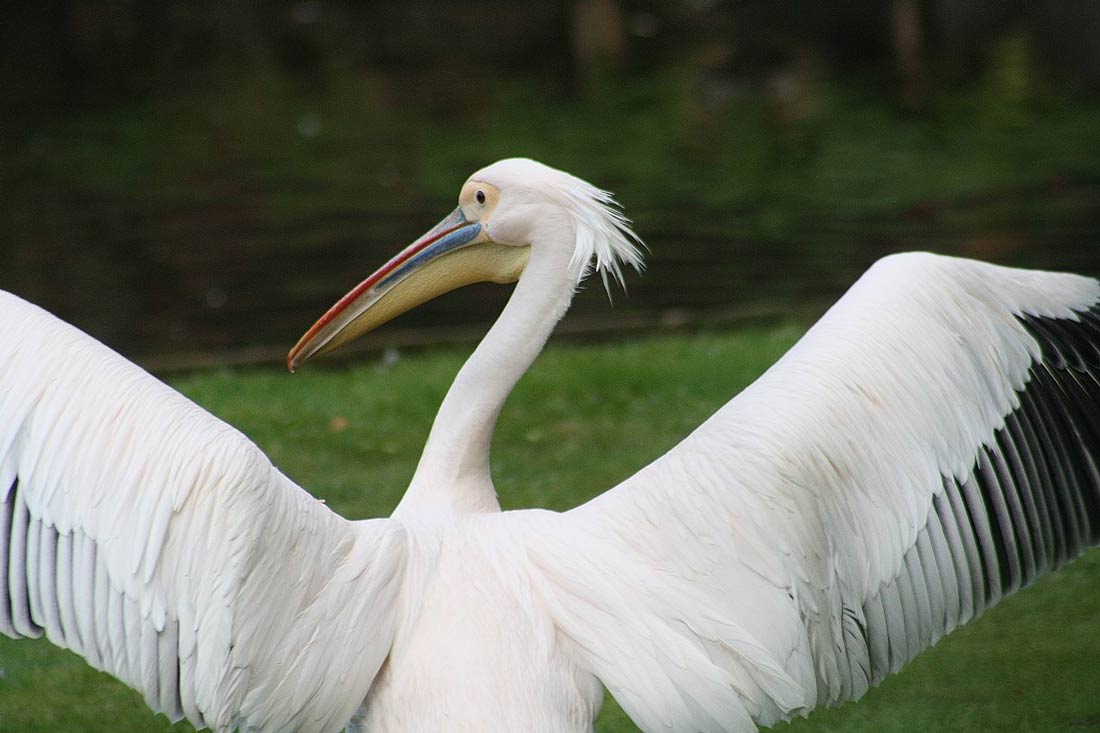 The diet of the Great White Pelican consists mainly of fish. They leave their roost to feed early in the mornings and may fly over 100 km in search of food. Common carp are preferred in Europe, mullet- in China and Aphanius dispar (carp)- in India. In Africa the common cichlids, including many species in the Haplochromis and Tilapia genera, seem to be preferred.

The pelican’s pouch serves simply as a scoop. As the pelican pushes its bill underwater, the lower bill bows out, creating a large pouch which fills with water and fish. As the bird lifts its head, the pouch contracts, forcing out the water but retaining the fish. A group of 6 to 8 great white pelicans gather in a horseshoe formation in the water to feed together. They dip their bills in unison, creating a circle of open pouches, ready to trap every fish in the area. Most feeding is cooperative and done in groups, especially in shallow waters where fish schools can be corralled easily, though these pelicans can forage alone as well.

Pelicans are not restricted to fish, however, and are often opportunistic foragers. In some situations they eat chicks of other birds, such as the well documented case off the south-west coast of South Africa. Great white pelicans also eat crustaceans, tadpoles and even turtles. They readily accept handouts from humans, and a number of unusual items have been recorded in their diet. During periods of starvation pelicans can eat seagulls and ducklings. The gulls are held under water and drowned before being eaten headfirst. A flock of captive great whites in St James’ Park, London (see below) is well-known for occasionally eating local pigeons, despite being well-fed. Pelicans can also rob other birds of their prey.

Their breeding season starts in April or May in temperate climate zones, in Africa is all year round, and in India is from February through April. Large numbers breed together in colonies. The female can lay from 1 to 4 eggs in a clutch, with two being the average. Nest locations vary. Some populations make stick nests in trees but the majority, including all those that breed in Africa, nest exclusively in scrapes on the ground lined with grass, sticks, feathers and other material. Both parents care for the young. The incubation stage lasts for 29 to 36 days. Chicks are naked when they hatch but quickly sprout blackish-brown down. The colony gathers in “pods” around 20 to 25 days after the eggs hatch. The young fledge at 65 to 75 days of age.

The Great White Pelican is one of the species to which the Agreement on the Conservation of African-Eurasian Migratory Waterbirds (AEWA) applies. It is classified as “Least Concern” on the IUCN Red List and is listed on Appendices I and II of the Convention on Migratory Species. It is listed on Appendix II of the Berne Convention on the Conservation of European Wildlife and Natural Habitats and on Annex I of the EC Birds Directive. Overall, though, the Great White Pelican is still one of the most widely distributed species.

In Bulgaria the Great White Pelican is protected, considered extremely rare and included in the Red Book. This means that once it is found nesting in the country, its territory must be declared as a protected natural territory with strict security.