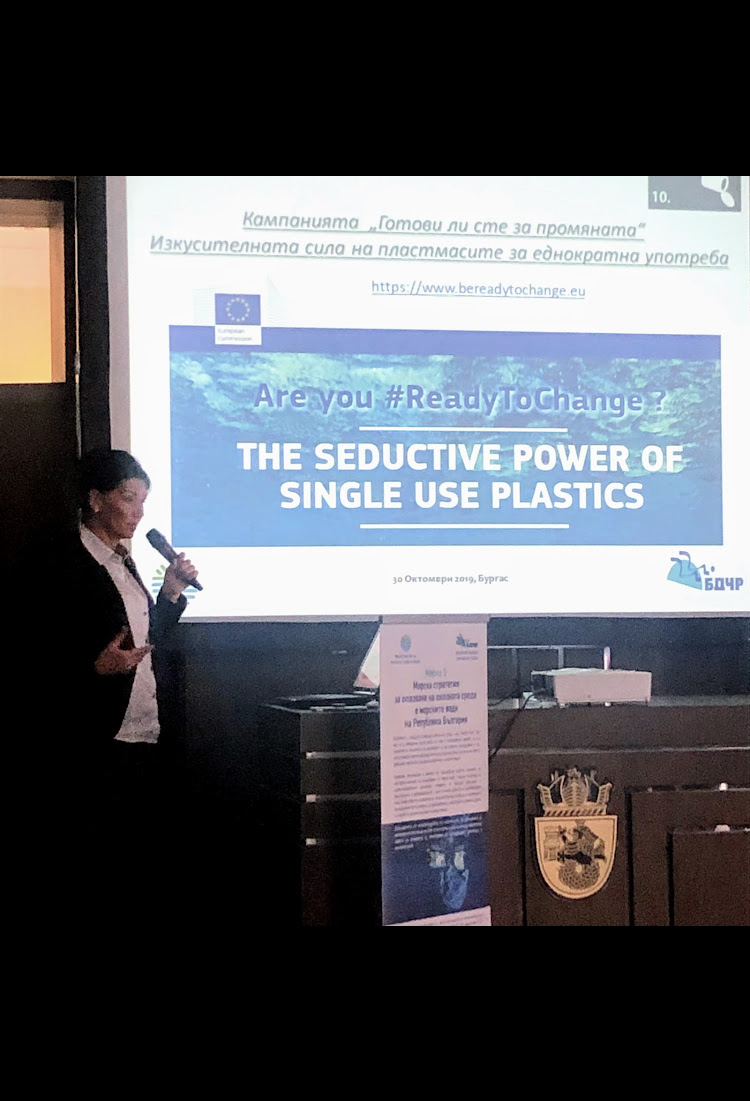 On October 30, 2019, on the eve of the International Black Sea Day, the Black Sea Basin Directorate of the Ministry of Environment and Water (MOEW) organized an Information Meeting to raise awareness of the consequences for the marine environment, caused by marine waste at the Sea Casino Cultural Center, city of Burgas.

Experts from the MOEW, National Institute of Meteorology and Hydrology (NIMH) at the Bulgarian Academy of Sciences (BAS), Green Balkans Wildlife Rescue Center and the Via Pontica Foundation, as well as representatives of the business sector and the general public took part in it .

The Coordinator of the project “Innovative Techniques and Methods for Reducing Marine Litter in the Black Sea Coastal Areas”, priority 2.2. “Awareness Raising and Joint Actions for Reducing River and Marine Litter, Joint Operational Programme “Black Sea Basin 2014-2020”, Ms. Ana Yancheva, from the Via Pontica Foundation presented the progress and the expected results of the actions undertaken by the Via Pontica Foundation together with the Burgas Municipality partner on the Measure 5 of the Marine Strategy of the Republic of Bulgaria.

She announced that alongside the main activities of the Project, in support of the targeted policy to reduce the pollution of the Black Sea and coastal regions, the Via Pontica Foundation and the Municipality of Burgas regularly organize educational campaigns and seminars for children, students, and the general public to promote and popularize the pollution prevention activities and to clean beach / coastlines through volunteer participation and production of information materials (posters, brochures, leaflets, etc.) and distribution videos through the redmarlitter.eu, viapontica.org and mass media websites.

Measure No 5 concerns the coordinated organization / support of annual business awareness campaigns (merchants, beach concessionaires, beach service users, fishermen, etc.) and the public (tourists, students, children, etc.), with regard to the consequences for the marine environment caused by marine litter and the need for their recycling.

The Green Balkans WRC presented the project ” CeNoBS – Support MSFD implementation in the Black Sea through establishing a regional monitoring system of cetaceans (D1) and noise monitoring (D11) for achieving GES, launched at the beginning of this year and united the efforts of partners from Bulgaria, Monaco, Romania, Ukraine and Turkey.

Professor Dr. Jordan Marinsky (NIMH) announces the results and forthcoming tasks ahead of the project “Environmental Protection of Areas Surrounding Ports Using Innovative Learning Tools for Legislation” – ECOPORTIL, which is about to end October this year. The leading partner of the project is the Technological Educational Institute of Epirus, Greece, and partners are: Port Infrastructure DP, Bulgaria, University of the Aegean, Greece, National Institute of Meteorology and Hydrology – Bulgarian Academy of Sciences, Bulgaria, Maritime Institute of the Eastern Mediterranean, Cyprus and Transport Institute, Albania.

The Municipality of Burgas, represented by Ms. Maya Ruseva, Director of the European Policies and Programs Directorate, shared best practices and serious steps taken to limit plastic products among employees and subcontractors, involved in the activities and projects of the Municipality.

It is recognized as a good example the creation of a series of events on similar topics to share experiences and good practices regarding the environmental and human health consequences of marine wastes and the need for their recycling.

The themes have caused many comments and have led to a heated discussion on the raising awareness and promoting action to protect the Black Sea.

Information Meeting on the Effects on the Black Sea Caused by Marine Litter
Via Pontica Friday November 1st, 2019 News