A re-launch shopping bag flash mob took place on the Blue Market in Varna on July 3 – an international day for a world without plastic bags. The action is an idea of the Public Center for Environment and Sustainable Development (OCCASM) and is part of the initiatives, launched in various cities of the country under the slogan “Free of Plastic”.

Exactly at 2:00 pm. young people walked from the Yunashki area to the Blue Market and stopped every passerby with a plastic bag in their hands. “When you go to market, take your bag and on the stand say,” No, thank you, I carry it! “(#NeMersiNossyaCi). With this message the volunteers donated to the citizens and the guests of Varna shopping bags for reuse.

The local authority and the business representatives of the resort agreed on the complete removal of the disposable plastic products in Bansko. On the International Day without plastic bags in the retail outlets were offered paper bags and cloth bags branded with the logo of the campaign “NERAZDELNOBansko”. 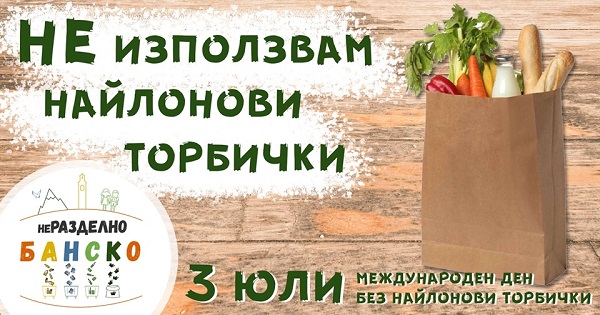 The integrated campaign for separate collection and recovery of waste, as well as the reduction of non-degradable, started just a month ago, involving schools, partner institutions, businesses and households in Bansko. The pilot measure for collecting green waste that is composting in the regional landfill or home composts started last year and the result is over 10 tonnes of used mass.

Bansko Municipality and the business signed an agreement on 03.07.2019 which aims to eliminate completely disposable plastic products until 2021, and paper, glass and plastic packaging to be collected separately to 100 percent. The food stores were provided with paper bags and cloth bags to replace plastic bags. Children participated in the creation of the longest drawing on Green Ideas.

Plastic bags and food and beverage packaging are detrimental to the environment and, in the long run, to human health. Bulgaria is the last in Europe’s statistics for environmental self-awareness and informing. 246 plastic bags are used by every Bulgarian every year (third place in Europe). We use a bag every 12 minutes before discarding it.

Most plastic bags are made of non-recyclable material. They do not break down, but break up to 400 years in tiny parts (micro plastics) that enter into the food chain.

Why is this world day organized and why is it important to stop using plastic bags and all kinds of disposable plastic products?

• Because the measures to reduce the use of disposable polyethylene bags in Bulgaria have so far not been successful. The ban on these bags is supported by European legislation and would be a much more effective measure if we apply it in Bulgaria.
• Every year, up to 1 trillion polyethylene bags are used worldwide, equivalent to 1 million per minute. The average useful life of a polyethylene bag lasts 12 minutes after which it becomes an unnecessary waste;
• In the European Union, 800 000 tonnes of disposable polyethylene bags are used annually, or 191 per capita, but only 6% of them are recycled. The remaining quantity ends in the best case at landfills, where it often creates problems such as clogging the collecting pipes for leachate (harmful waste water from the waste) or polluting the environment not only in cities but also in remote places in nature;
• The ease of the polyethylene bags allows their distribution away- a huge quantity goes to the world’s seas and oceans where they cause the deaths of more than 100,000 marine animals per year;
• Polyethylene bags are made from non-renewable and limited raw materials – oil and natural gas. 40% of world oil used goes to produce plastic;
• More than 1 000 000 birds die each year because of the swallowed plastic that confuses them with food;
• Sea water researchs indicate, the ratio of plankton and plastic is 1 to 6 in each liter of plastic in favor of the plastic.

All these terrible statistics are not just figures but they show a real problem that every one of us can prevent by stopping the use of disposable plastic and using cloth bags instead of nylon.