Citizens for Science in Pesticide Regulation – A European Coalition

The European Union has one of the best regulations for pesticides in the world – in theory. But it is not implemented in practice. A new coalition, “Citizens for Science in Pesticide Regulation”, has launched this manifesto to call for reform.

This action comes at a crucial time, when the European Commission is reviewing the pesticides legislation as part of its REFIT programme. In addition, the European Parliament’s PEST committee, convened by concerned MEPs in the wake of the glyphosate reapproval controversy, will deliver its recommendations for reform of the pesticides authorisation process at the end of 2018.

Major conflicts of interest persist in the pesticides regulatory system. For example, industry does its own safety testing and is heavily involved in designing the methods for risk assessment. The European Food Safety Authority (EFSA) pesticides panel, responsible for the designing of risk assessment guidelines, continues to include people with financial ties to the agrochemical industry. The EFSA expert groups, which conduct the peer review of the application dossier and publish an opinion on whether it meets the criteria for approval of the pesticide, consist of anonymous national civil servants, whose conflict of interest is unknown. The Monsanto Papers, internal Monsanto documents disclosed in cancer litigation in the USA, show how industry can actively subvert science. It is now clear that industry must be kept at arm’s length from safety testing, risk assessment and risk management.

The result of the failure to properly implement the regulation is a rapid collapse of biodiversity (birds, bees, butterflies, frogs, and insects) in agricultural areas and serious harm to humans (including damage to the brain of the unborn foetus and a steady rise in hormone-related cancers such as breast and prostate). In addition to its failure to protect health and the environment, the current system also fails to protect food security for future generations, since biodiversity, pollinators, and soil fertility – the building blocks of a productive and resilient agriculture – are put at risk by pesticides.

A full reform of the current pesticide risk assessment and risk management systems is required, as follows:

A. Prioritise public health, the environment and sustainable agriculture

B. Ensure that decision-makers rely on data that is complete, public, up to date, and free from industry bias

C. Enable decision-makers, civil society, and the scientific community to scrutinise the integrity and effectiveness of the policy

If the EU regulation were properly implemented and risk assessment methods were overhauled to be scientifically rigorous and objective, a number of pesticides that were previously deemed safe would be shown to endanger human health and/or the environment and would have to be banned or restricted.

The above-listed reforms would lead to a higher level of protection for health and environment. Given the numerous non-chemical alternatives for plant protection based on ecological methods, the reforms would also stimulate innovation in agriculture in a more sustainable direction. As a result, food security could be guaranteed not only for the present but also for the future, by protecting the basic requirements for agriculture: biodiversity, soil fertility and water quality.

Produced by the “Citizens for Science in Pesticide Regulation”, a coalition of civil society organisations, institutions, scientific and legal experts. 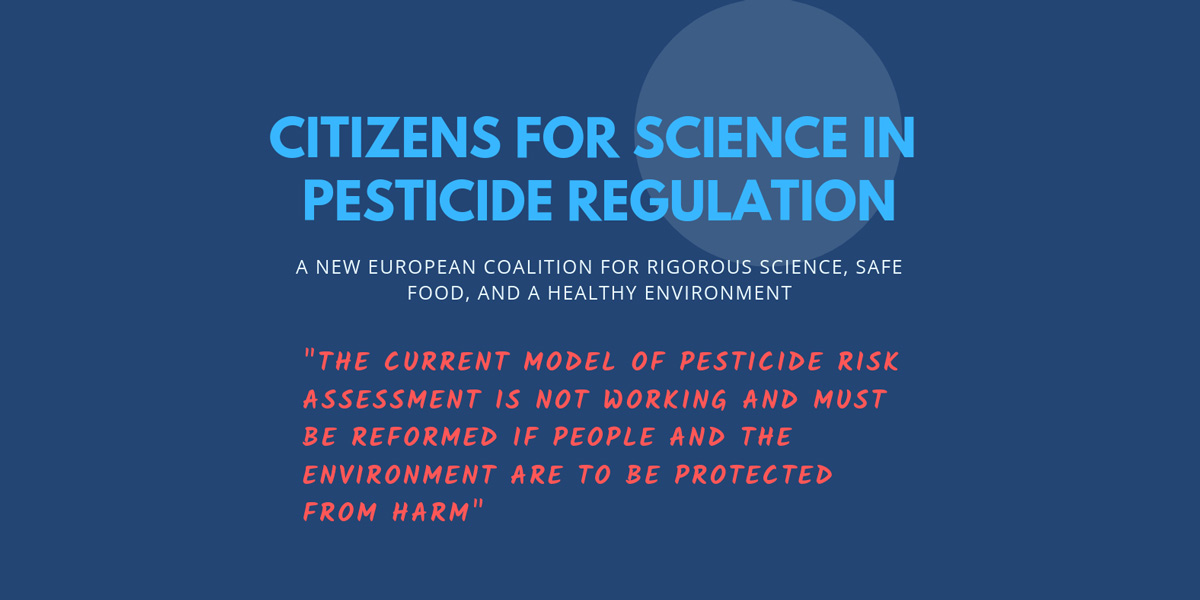 Česko proti chudobě a nerovnostem (Czechia Against Poverty and Inequalities)

European Federation of Trade Unions in the Food, Agriculture and Tourism (EFFAT)

Friends of the Earth Spain

Global 2000 (Friends of the Earth Austria)

NOAH (Friends of the Earth Denmark)

Plan B for Slovenia

The Cancer Prevention and Education Society

The Danish Society for Nature Conservation