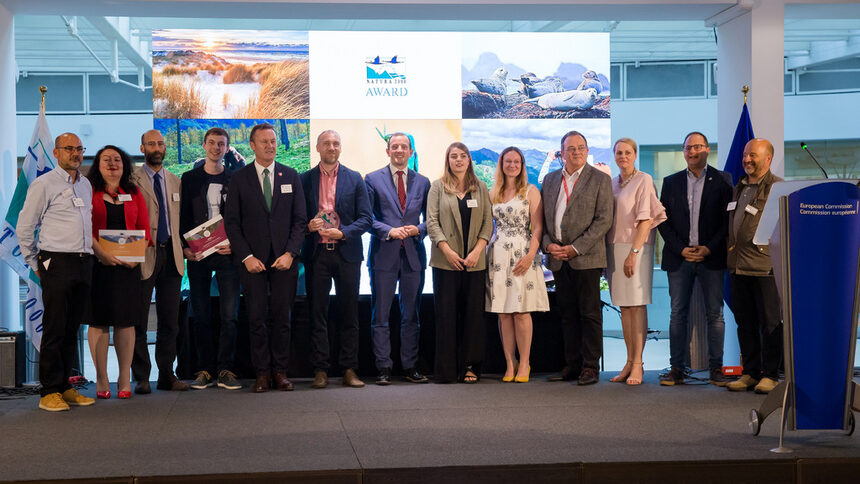 On the occasion of the 30th anniversary of the creation of the Natura 2000 network, the EU Commissioner for the Environment, Oceans and Fisheries Virginijus Sinkevičius announced the winners of the 2022 edition of the Natura 2000 Awards. The six winners include projects from Austria, Bulgaria, Greece, Portugal, Spain and a cross-border project from Germany, Austria, Luxembourg and Switzerland.

The Natura 2000 Awards recognise conservation success stories across the EU and raises awareness about one of Europe’s outstanding achievements – the Natura 2000 network of protected areas.

In addition to conservation on land, communication, socio-economic benefits, and cross-border cooperation, this year the Awards are handed out to an additional category – Marine Conservation. This is to raise the profile of the many important efforts going on all around the Union to step up protection for marine and coastal species and habitats. Furthermore, the Citizens’ Award goes to the winner of the online vote.

Protecting and restoring the EU’s natural heritage and biodiversity is crucial to mitigate and adapt to climate change while preserving life on Earth for generations to come. For the last 30 years, thousands of conservation professionals, volunteers and stakeholders have worked to protect and restore nature, preserving the benefits it brings. These people have made the network the success it is today.  In competitions, the trophy always goes to one, but we should all feel winners today because, when nature is protected, the benefits are there for all of us.

Natura 2000 is an EU wide network of nearly 27 000 protected sites that covers more than 18% of EU land territory and about 9% of its marine areas. The aim of the network is to ensure the long-term survival of our most valuable and threatened species and habitats. It is also the result of a unique process of cooperation between stakeholders at national levels, and among EU Member States, which demonstrate the value of EU cooperation. The good management of the network is at the core of the ambitious protection and restoration targets of the EU Biodiversity Strategy for 2030which aims to put biodiversity on a path to recovery by 2030, with benefits for people, climate and the planet.

This year, the European Citizen’s Award went to the project “Flora—Empowering Conservation Entrepreneurs in Austria”, led by the Blühendes Österreich and Birdlife Austria. The project aimed to secure long term management of high nature value farmland in Natura 2000 sites in Austria through the creation of specially-created partnerships with NGOs, communities and farmers, “the conservation entrepreneurs”. These areas are key to ensure the health of agroecosystems, which are vital for agricultural production and food security. The partnerships received financial support, technical advice and zoological-botanical monitoring to implement flagship projects. Over seven years FLORA supported 28 nature conservation projects, resulting in the enlargement and improvement of 19 protected habitat types and hundreds of species.

The winners in the other five categories are:

The Conservation on Land Award went to the project “Adaptation of Eleonora’s falcon to climate change” led by the University of Patras in Greece. This EU LIFE-funded ElClimA project implemented a range of actions aimed to facilitate Eleonora’s Falcon adaptation to climate change focusing on the improvement of its breeding performance over seven Natura 2000 sites. These actions included a rat eradication programme to prevent egg predation, installing artificial nests for optimal egg temperature regulation, and ensuring food sources from passerine birds by planting fruit trees, bushes and cereals to increase stopover times. The actions resulted in an impressive 42% increase in breeding success of the Eleanora’s falcons across the seven sites.

The Bulgarian communication campaign “Natura 2000 in Bulgaria: new horizons”, implemented by Green Balkans, won the Communication Award. This high-profile communication initiative funded by the EU LIFE Programme sought to raise awareness about the Natura 2000 network in Bulgaria using flagship species and habitats to communicate key aspects of Natura 2000. The estimated outreach is 4.5 million people through its work. The campaign produced and distributed audio, visual and written content through online streams, daily and weekly newsletters and a YouTube channel. National events and webinars were also organised. These efforts have resulted in nature-related issues receiving more attention in the media, and in the public as a whole.

The Socio-Economic Benefits Award, which recognises initiatives that demonstrate that nature conservation and economic development can go hand-in-hand, went to “Social inclusion and managing invasive alien species”. This project, led by the AMICA association and supported by the EU LIFE funding programme, aimed to eradicate pampas grass from five coastal Natura 2000 sites in Cantabria in Spain, while also addressing the serious difficulties faced by people with disabilities in entering the labor market. The project employed 22 people with disabilities to remove the invasive grass and replant natural vegetation, encouraging capacity building and social integration in addition to habitat conservation. In addition to the employees, a further 40 people with disabilities gained experience through volunteer activities.

The Marine Conservation Award went to the achievements of “Fishermen and seabirds, allies for the sea”, implemented by SPEA – Sociedade Portuguesa para o Estudo das Aves. This initiative, funded by the EU LIFE Programme and the European Maritime and Fisheries Fund, addressed the threats to seabirds posed by commercial fishing nets or hooks, by developing various mitigation measures. Through working closely with fishermen, one a device was developed which is highly effective in reducing bird by-catch. This device, dubbed the “scary bird decoy” scared seabirds away from fishing equipment and significantly reduced the number of birds caught in the gear. As the device is simple to use and highly effective, all fishermen involved in the trial continue to use it, and further work is being done to extend its use to other fishing vessels.

“Evaluate the dark side with the CaveLife app”, led by the German Speleological Federation, won the Cross Border Cooperation and Networking Award. The project developed the CaveLife smartphone app, which allows amateur cavers to contribute to the assessment of underground habitats and species by uploading data to a centralized database. Few official assessments of underground habitats exist, and this application allows hundreds of volunteer speleologists across Europe to contribute to building a database of cave knowledge. This data can then be used by conservation authorities to make more informed decisions in their work. The app is available in English and German and is already being used in Germany, Austria, Luxembourg and Switzerland; a French version of the app is being developed.

The Award is open to anyone directly involved in management of or communication about the EU’s Natura 2000 network – businesses, government bodies, NGOs, volunteers, land owners/users, educational institutions or individuals. This year, a total of 40 applications from across Europe were received, out of which 21 projects were shortlisted. A high-level jury then selected the winners.