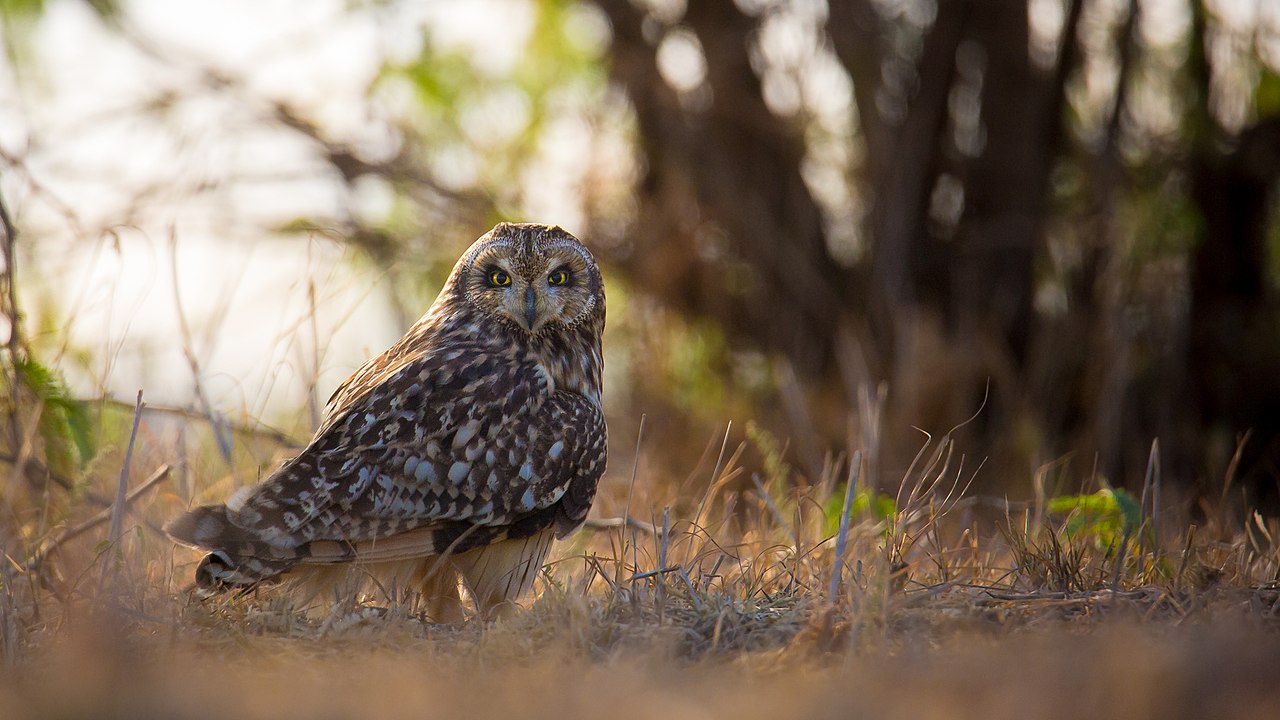 The short-eared owl is a medium-sized owl measuring 34–43 cm  in length and weighing 206–475 g . It has large eyes, a big head, a short neck, and broad wings. Its bill is short, strong, hooked and black. Its plumage is mottled tawny to brown with a barred tail and wings. The upper breast is significantly streaked. Its flight is characteristically floppy due to its irregular wingbeats. The short-eared owl may also be described as “moth or bat-like” in flight. Wingspans range from 85 to 110 cm. Females are slightly larger than males. The yellow-orange eyes of A. flammeus are exaggerated by black rings encircling each eye, giving the appearance of them wearing mascara, and large, whitish disks of plumage surrounding the eyes like a mask.

The short-eared owl is a species of nocturnal bird of prey that loves humid climates. It is found in Russia, Scandinavia, Great Britain, Iceland and partly in the Netherlands. In Central Europe it can be seen relatively rarely. The largest population of owls is in the Asian part of Russia. On the American continent it can be observed in Canada, the northern United States and Hawaii, as well as in the Andes and the Galapagos Islands.

Inhabits wetlands and pastures and arable land near them. It is also found in Bulgaria.

Birds from the far north migrate in winter to the warmer climate of Southern Europe, including in our country. Birds from the south are erratic in their movements.

Hunting occurs mostly at night, but this owl is known to be diurnal and crepuscular as well. Its daylight hunting seems to coincide with the high-activity periods of voles, its preferred prey.It tends to fly only feet above the ground in open fields and grasslands until swooping down upon its prey feet-first.Several owls may hunt over the same open area.Its food consists mainly of rodents, especially voles, but it will eat other small mammals such as mice, ground squirrels, shrews, rats, bats, muskrats and moles. It will also occasionally predate smaller birds, especially when near sea-coasts and adjacent wetlands at which time they attack shorebirds, terns and small gulls and seabirds with semi-regularity. Avian prey is more infrequently preyed on inland and centers on passerines such as larks, icterids, starlings, tyrant flycatchers and pipits. Insects supplement the diet and short-eared owls may prey on roaches, grasshoppers, beetles, katydids and caterpillars.

Sexual maturity is attained at one year. Breeding season in the northern hemisphere lasts from March to June, peaking in April. During this time these owls may gather in flocks. During breeding season, the males make great spectacles of themselves in flight to attract females. The male swoops down over the nest flapping its wings in a courtship display. These owls are generally monogamous.

The short-eared owl nests on the ground in prairie, tundra, savanna, or meadow habitats. Nests are concealed by low vegetation, and may be lightly lined by weeds, grass, or feathers.Approximately 4 to 7 white eggs are found in a typical clutch, but clutch size can reach up to a dozen eggs in years when voles are abundant. There is one brood per year. The eggs are incubated mostly by the female for 21–37 days. Offspring fledge at a little over four weeks. This owl is known to lure predators away from its nest by appearing to have a crippled wing.

The short-eared owl is listed in Annex I of the European Union Birds Directive. Protected species from the Biodiversity Act. 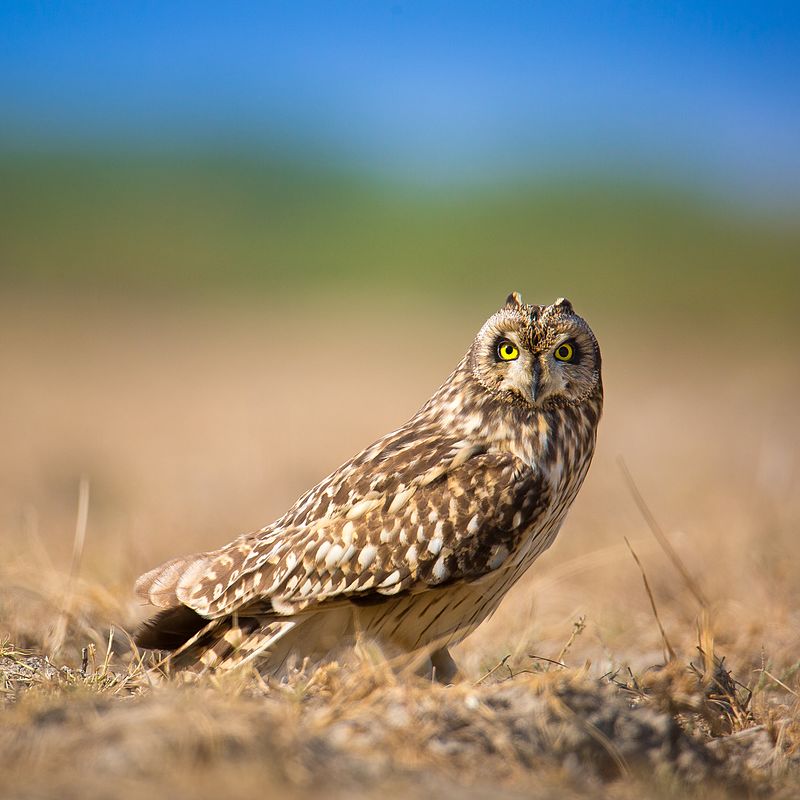 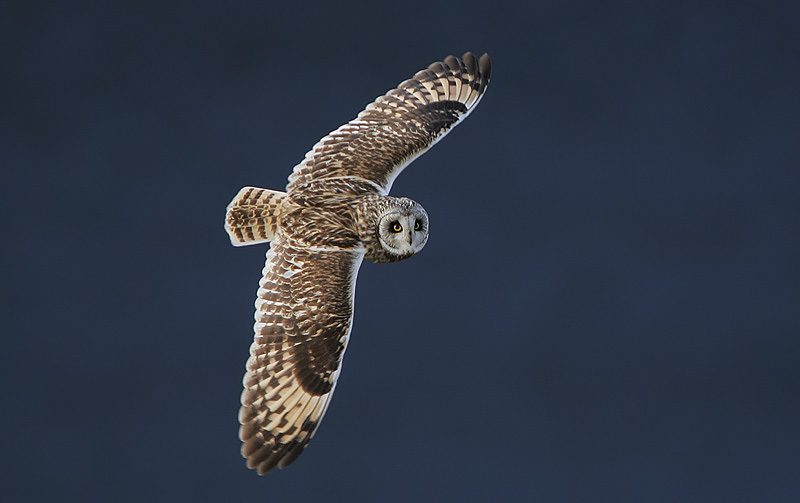 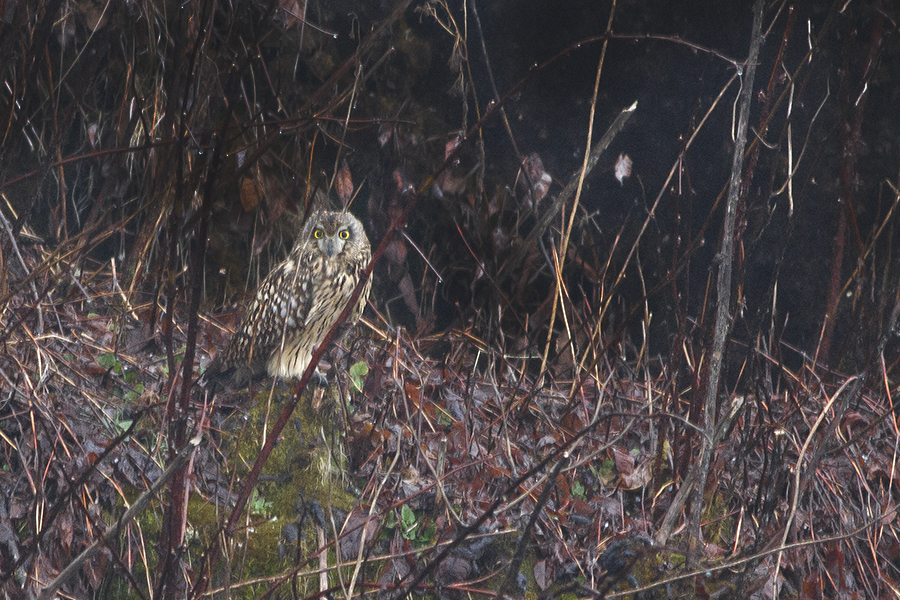