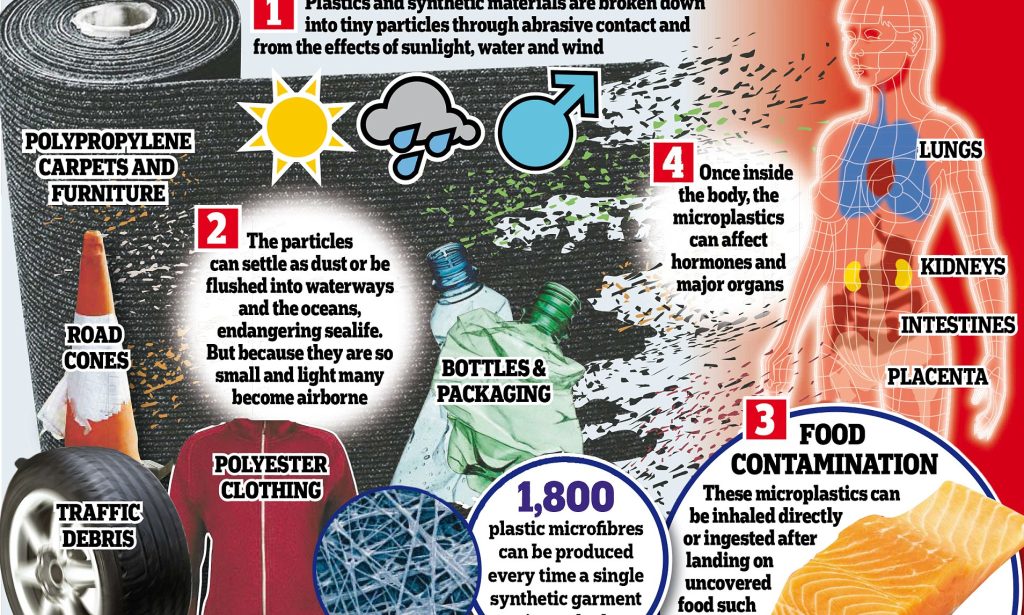 Microplastics are “one of the greatest manmade disasters of our time”, according to the Natural History Museum. That’s bad news, given they are also everywhere; in tap water, the food you buy, the clothes you wear and the air you breathe.

The largest microplastics can be seen by the naked eye and are anything under half a centimetre in size – just smaller than the width of a pencil. But many of them are small enough to act like specks of dust which we can inadvertently breathe in or eat in food. The smallest particles are called nanoplastics and they are small enough to get their way deep into the human body.

New findings from the University of Portsmouth shown on Good Morning Britain found that there is so much synthetic material in our homes that we might be breathing in up to 7,000 microplastic particles a day. Using specialist equipment, they measured a typical family home and found the highest concentration of it was in the bedroom of the family’s eight-year-old daughter, whose room was decorated with plastic-based bedding, carpet and soft toys.

Although research is in its infancy, the risks of these plastics could be serious – some studies have linked high exposure to cancer risk and disrupting our hormones. In animal studies, the particles have been shown to affect metabolism, gut bacteria and the immune system, among other things.

It is not yet known what a healthy level of microplastics might look like, but Dr Sabine Donnai, CEO of the Viavi clinic, is adamant that many people in the West are over the threshold. In tests at her clinic, patients often come back with dangerously high levels of plastic in their bodies, she says. “There are enormous amounts [of microplastics] and a variety of them,” she says. “We find rigid plastics like BPA, or phthalates you find in flexible plastic like cling film. If you eat a lot of crisps, you find crisp packet plastics.”

But she is sure that everyone can reduce their exposure with a few easy tweaks. “There are easy wins and low hanging fruit”, she says. We dig into those below.

In plastic terms, you might be better off having your weekend curry at the restaurant rather than delivered. Any time plastic containers are heated, chemical changes in the material mean it can leach microparticles into your food. “I don’t mind having strawberries in a plastic box,” says Dr Donnai, but when plastic is heated it’s a different story.

If you can’t avoid the takeaway boxes, try not to reheat food in them when having leftovers or eat directly from them. Instead, decant them to a plate.

“A water bottle in the fridge which is cold is good, but [it will be worse] as soon as you put it in your hot car,” says Donnai. “Or it might have been sat in a hot warehouse before you got it.”

She recommends using a glass bottle when you’re on the go, and filling it with water that has gone through a reverse osmosis filter, which can help to remove the microplastics in tap water.

“Cling film is bad: never microwave it or put it on hot food,” says Donnai. You could instead cover food in the fridge with a natural beeswax-coated cloth wrap, and cover it with a plate when microwaving to save spills.

The heat of the coffee will encourage the plastic to leach into your drink. Instead, bring a reusable glass cup for takeaways or consider drinking your coffee in a cafe. “I see people walking along the street drinking through plastic lids on coffee cups and I think: ‘What are you doing?’” says Donnai.

You can also cut down on your plastic consumption by saying no to straws and drinking from glasses.

Last year, researchers from Trinity College Dublin published a paper showing that up to 16.2 million bits of microplastic were found in every litre of formula made in polypropylene baby bottles. In the study, highest rates were found in bottles sterilised with hot water, a process that “significantly” increased the release of plastics. The researchers concluded that there is an “urgent” need for more research to see whether this amount of microplastics is safe for baby health.

To reduce your baby’s exposure, you could think about swapping plastic baby bottles for glass versions. Alternatively, you could use other methods to sterilise that don’t involve heating, like UV light sterilisation machines or with sterilising powder or tablets.

Donnai also suggests looking at other sources of plastic in your children’s lives, including baby chewing toys or dummies which are particularly harmful because they go in the mouth. Similarly, she recommends that adults stop chewing on the end of pens.