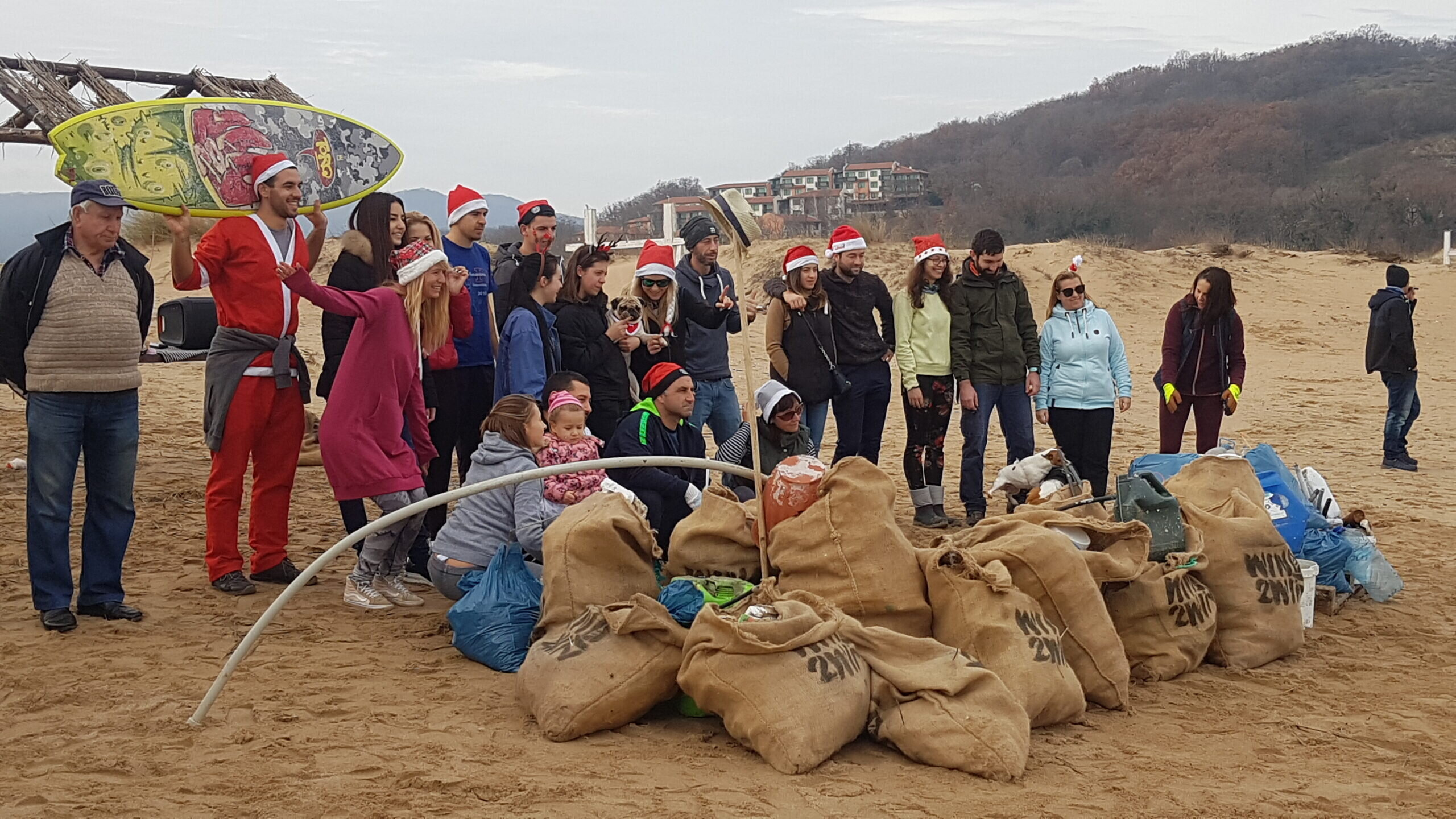 „Аkasha“ school surf enthusiasts and their friends ended the year in a very attractive way. Surfers behind the Wind2Win Clean Campaign and the blogger Nikola Bobchev of Lessplastic Bulgaria have organized a winter cleanup at Arkutino Beach on Christmas Eve.

This year’s participation in the Clean Christmas campaign is under the motto: “Black Sea without Plastic and Concrete”.

Before the bTV Mr. Vladimir Dimitrov of the Green Strandzha Association, said that the beach, which was well cleaned in June, has become a landfill again. According to the inscriptions and the type of waste, most of them are from Turkey, Romania, Ukraine, he said.

During sea storms, tons of waste are dumped on shore. Only about an hour volunteers filled dozens of garbage bags. Some of the debris across the rivers falls into the sea, said reporter Laura Stamatis, waving a chocolate dessert package that came from Turkey.

More than 60% of the waste dumped from the Black Sea along the coast are plastic.
This shows a study by the Basin Directorate. 10 of the largest but landless beaches along the Black Sea have been surveyed.

“These are everyday products, everyday products – straws, stirrers, utensils …  The environmental culture of society is increasing, people are becoming more alert,” explains the head of the Marine Conservation and Monitoring Department, Ms. Miroslava Robinson. The results show that the total amount and weight of offshore waste is decreasing.

The survey does not cover winter, and it is then that the sea throws away the most rubbish, reports eco-organizations. During their last hike in the Ropotamo Reserve, Green Strandzha activists determined that one of the bays was buried by debris.

Scientists in Burgas are working on a project to reduce plastic particles in the Black Sea.

“The idea is to receive information about the type of pollution, to be able to estimate the levels and work with effective measures to minimize them,” says BAS Regional Representative Prof. Sevdalina Turmanova, who is also chairman of the Burgas Municipal Council.

The first step is to ban the use of plastic by tourists on St Anastasia Island.

After the end of today’s action, which the organizers called “Clean Christmas”, part of the collected waste, which is suitable for art installations, was separated and from 16:30 at the Flora Exposure Center in Burgas, an attractive Christmas decoration was made. For the art workshop in the Sea Garden, the organizers have provided a Christmas dress code.

The finale is a free screening of the movie “Wind of the Sea,” which was shown in the summer in many places around the country. After that, there is also time for discussion on Black Sea topics.

Surfers and Friends Make a Clean Christmas Campaign under the Motto: “Black Sea without Plastic and Concrete”
Via Pontica Saturday December 21st, 2019 News