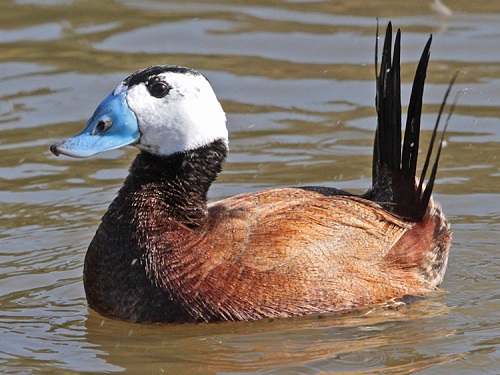 The White-headed Duck weighs between 500 and 900 g. It has a short and stocky body with a length of 43-48 cm and its neck is short and thick. Its wings are disproportionately small and short and their wingspan reaches 62-70 cm. In nuptial plumage the male has a white head surmounted by a black cap, a large blue beak with a characteristic swollen base. It has a thick black collar. The body is bright red, more sandy on the flanks and on the top. Adult females have a rather dull colouring: a gray-brown body and a dark bill, pale face with a dark cap and cheek-stripe and a blackish, less swollen bill.

As an excellent swimmer the White-headed Duck can travel from 30 to 40 meters under water. It always lands and flies off from water. Before flying off it runs on the water surface. It rarely comes to land where it moves very awkwardly. 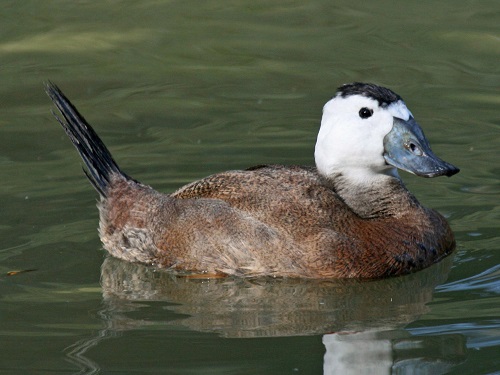 The White-headed Duck belongs to the Palaearctic species with a fragmented breeding area from southwestern Europe and northeastern Africa to Central Asia and China. It winters on the Balkan Peninsula and the countries of Southwest Asia where all representatives of the species gather.

Its habitats are isolated and distant from one another- extensive fresh water basins, brackish and salty coastal lagoons, sea bays, estuaries and ponds. It prefers saltwater pools, overgrown with vegetation and reed. Most birds are migratory, wintering in Europe from the Russian Far East and Kazakhstan.

In Bulgaria it is a wintering and migratory species, distributed mainly on the Black Sea coast. Since 1991 there has been an increase in their numbers in the wetlands around Burgas where now is focused a significant portion of the world population of the species (12%). The largest is at the Vaya Lake.

The White-headed Duck is a relatively cautious, silent and secretive bird which feeds in the twilight hours in the dawn and dusk. As a diving duck its diet consists of midge larvae and other aquatic invertebrates, seeds and the vegetative parts of aquatic plants. It can dive for long periods while eating. 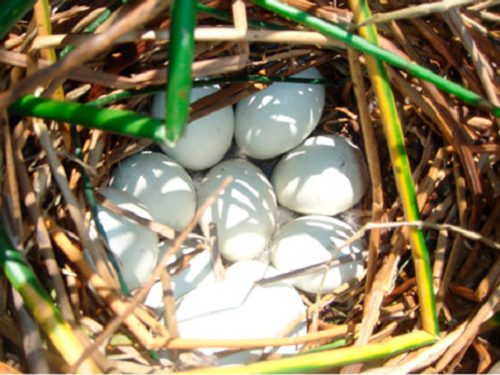 The White-headed Duck is a monogamous bird. Its breeding begins in April with broods hatching mostly in June and July. The nests are a platform of reed stems and leaves sparsely lined with down and are built in dense vegetation, on the ground or over water, often in the old nests of other water birds. They are sometimes sited within gull and tern colonies, and birds can use specially constructed nest-boxes. The nest is arranged in such a way that the breeding poultry can jump from it directly into the water and dive. The nest is covered with fluff. The White-headed Duck lays from 5 to 15 eggs often one on top of the other and females can lay again if the first clutch is lost. The eggs are large, measuring 66 x 50 mm and weight up to about 100 g, the shell is rough, porous and thick. At first they have a bluish color and after incubation starts they become yellowish. The female incubates alone for about 25 days. Ducklings start flying in about two, two and a half months. 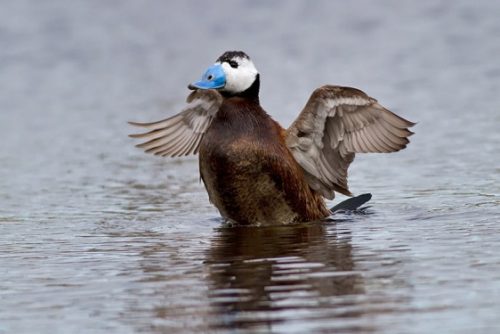 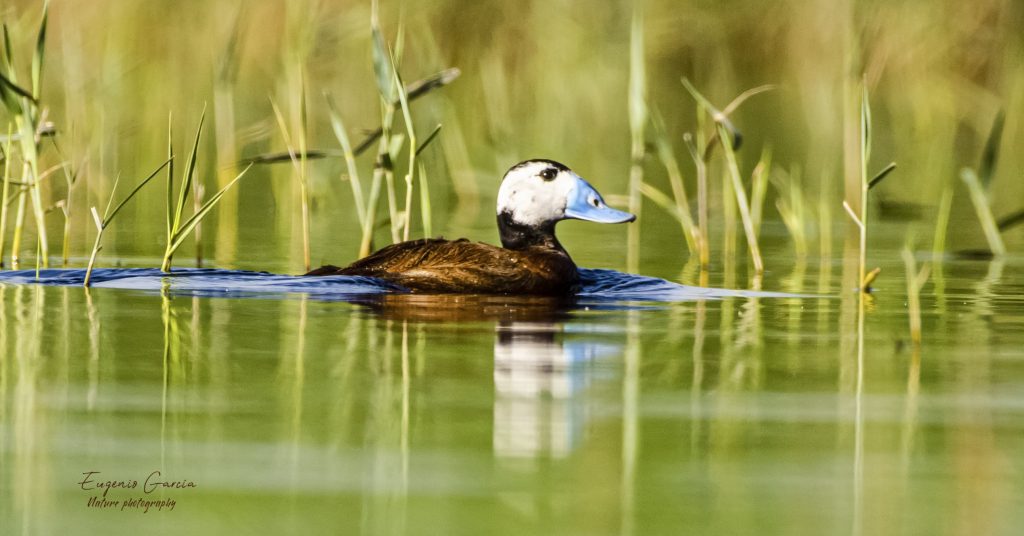